Spotted a News article that someone you know would love?
Tap 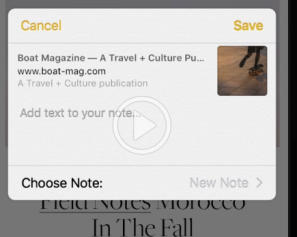 When I heard about this function I never thought I would use it, BUT… it is fabulous.  The local newspaper had a wonderful section on great hikes in the area. In 2 taps, I had the link saved in notes. Tap 1- share button, tap 2 – Notes.

Read on: Make a note of that – iOS 9 Tips and Tricks for iPad

Earlier this week, Google took away the ability to create and edit documents in the Google Drive app and turned that app into a place to access and view resources that are stored in the cloud. Along with that, Google released two new free apps, Google Docs and Google Sheets. These new apps replace the functionality that used to be available in the Google Drive app, which means you need all three apps to create and organize content. Read  more.

Any growth requires a temporary loss of security.